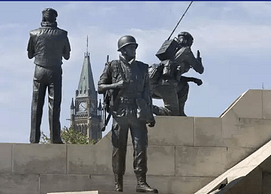 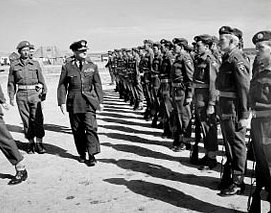 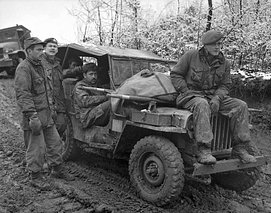 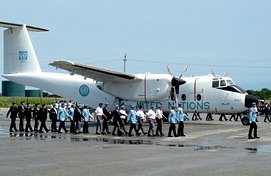 is open to those Canadians who have served in mission areas as a member of, or in support of peacekeeping forces, observer groups, action groups, or any other such organization in which participation was sanctioned by the Government of Canada and which were not under the auspices of the United Nations.

is open to those Canadians who actively support the goals of the Association but are otherwise not eligible for ordinary or associate membership.

Honorary members do not have voting status.

Peacekeeping may involve the employment of military personnel from several countries to maintain or restore international peace. Peacekeeping missions have usually been formed to monitor cease-fires, observe troop withdrawals and provide a buffer between opposing forces.

Unarmed peacekeepers may be employed on observer missions, where their job is to observe and report. When they act as buffers between opponents who had fought and might fight again, they may carry light weapons for self-defence. Some peacekeeping missions may help to restore order. Some may involve operations which seem very much like conventional war.

Peacekeeping operations are meant to be temporary measures. They are not expected to resolve a conflict.

The first mission began in 1947 with the United Nations Temporary Commission on Korea. The purpose was to supervise the withdrawal of occupation forces. Canada contributed two officers as military observers.

The first Peacekeeping Force was created in 1956 in response to the Suez Crisis. Lester Pearson, who later became our Prime Minister, proposed a solution - a UN emergency force to separate the fighters and to supervise a cease fire.

Since that time Canada has taken an important role in peacekeeping. Canadians have served in places such as, the Gaza Strip, Sierra Leone, The Congo, Kashmir, West New Guinea, Cyprus, the Golan Heights, Lebanon, East Timor, Iraq, Iran, Central America, Cambodia and in the former Yugoslavia.

When Canada first started to contribute to peacekeeping only military personnel participated. In more recent years, members of the Royal Canadian Mounted Police, officials from Elections Canada and External Affairs have worn the UN blue beret.

More than 100,000 Canadians have participated in United Nations Peacekeeping duties. That is more than any other country. There are about 2,500 Canadians currently serving in operations.

Peacekeepers have helped to make the world a better place. The Norwegian Nobel Committee recognized the good work they had been doing and awarded them the Nobel Peace Prize in 1988.

Canada made a decision to honour its peacekeepers, past, present and future, by dedicating a monument to their good work. The monument was unveiled in Ottawa in October 1992.

It consists of three 10 foot high bronze figures representing a radio operator, an observer, and a sentry. To the side, there is a grove of twelve trees that represent the heroes from the ten provinces and two territories who have served as peacekeepers. The grove is a symbol of hope for the future and rebirth.

There is an inscription from a speech made by Lester Pearson in November 1956. It reads:

"We need action not only to end the fighting but to make the peace. My own government would be glad to recommend Canadian participation in such a United Nations force, a truly international peace and police force."

On August 9th, 1974 while on a regular supply run, the 461 Aircraft was descending into Damascus en route to a United Nations base on the Golan Heights when it came under attack from three, surface to air, missiles. On board that aircraft were five crew members and four passengers, the largest number of Canadian Peacekeepers that were killed at one time. Manitoba recently recognized the work of Peacekeepers and has proclaimed August 9 as Peacekeeping Day. This day will be celebrated every year on the Sunday closest to the 9th of August.

Today, there are chapters of the Canadian Association of Veterans in United Nations Peacekeeping in all parts of Canada, and there are three categories of membership in the CAVUNP: