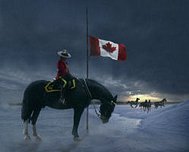 A Pittance Of Time

From the video 'A Pittance of Time'

God forgive me for wanting to strike him.
Give me strength so as not to be like him.
My heart pounds in my breast, fingers pressed to my lips,
My throat wants to bawl out, my tongue barely resists.

But two minutes I will bide.
It's a pittance of time,
For the boys and the girls who went over.
In peace may they rest.

May we never forget why they died.
It's a pittance of time.

Read the letters and poems of the heroes at home.
They have casualties, battles, and fears of their own.
There's a price to be paid if you go, if you stay.
Freedom's fought for and won in numerous ways.

In peace may they rest,
Lest we forget why they died.
Take a pittance of time.

Terry Kelly wrote this song based on an experience he had in a store on November 11. For the complete story,the music and video visit Terry Kelly at http://www.terry-kelly.com/. If you haven't seen the video or heard the song then you must go to his home page or visit this page which has the music, video, photos and much more.

In memory of
Sgt. Charles Stewart Mackenzie, Seaforth Highlanders.
Who, along with many others,
gave up his life so that we could live free.

WE WILL REMEMBER THEM

Written by Joe Kilna MacKenzie, this song is dedicated to the memory of his late Grandfather, Sgt. MacKenzie. This song was featured in the Hollywood movie, "We Were Soldiers" Directed by Randall Wallace & starring Mel Gibson.

(as told from a senior RCMP officer to a junior member)

To Queen and country you will swear
Your oath, loyal and true
To serve amongst the finest
Canada's family in blue

Proud to be Canadian
Shoulder to shoulder, thin blue line
Proud to make a difference
One person at a time

Yes, you will arrest the bad guys
Get in a scrape or two
Stand up tall and dust off
That proud yellow stripe on blue

And if one day that yellow stripe
Should fall horizontal to the ground
Take heart young Mountie, you're not alone
Your friends, they are around

Your family in blue will carry you
They will see justice done
For you they will stand, as the saying goes
"One for all and all for one"

And if like the sun, that yellow stripe
Should fade when the day is done
A grieving nation will mourn the loss
Of another daughter or son

The flag will fly at half-mast
But we, we will stand tall
You did your duty, you made us proud
"Above and beyond the call"

A sea of red will stand in tribute
While the bagpipes play
To honor your life, cut short,
was lost, at the closing of the day

But for now, young Mountie
Stand firm. Stand fast. Stand true.
To protect and serve proudly
With that yellow stripe on blue.

Here are some poems and stories I have come across in my travels that I thought you might like to read also. Some are American, some are Canadian, but the meaning is basically the same. The names of the authors are there if they had names where I found them. If not I don't know who the author is. If you know anything about the writers or if you think I shouldn't be displaying them here let me know and I will correct it.

This piece was written and published by A. Lawrence Vaincourt, a Canadian RCAF veteran. It has appeared on thousands of website, newspapers and publications around the world.

He was getting old and paunchy and his hair was falling fast,
And he sat around the Legion, telling stories of the past
Of a war that he had fought in and the deeds that he had done,
In his exploits with his buddies; they were heroes, every one.
And tho' sometimes, to his neighbours, his tales became a joke,
All his Legion buddies listened, for they knew whereof he spoke.
But we'll hear his tales no longer for old Bill has passed away,
And the world's a little poorer, for a soldier died today.

He will not be mourned by many, just his children and his wife,
For he lived an ordinary and quite uneventful life.
Held a job and raised a family, quietly going his own way,
And the world won't note his passing, though a soldier died today.

When politicians leave this earth, their bodies lie in state,
While thousands note their passing and proclaim that they were great.
Papers tell their whole life stories, from the time that they were young,
But the passing of a soldier goes unnoticed and unsung.

Is the greatest contribution to the welfare of our land
A guy who breaks his promises and cons his fellow man?
Or the ordinary fellow who, in times of war and strife,
Goes off to serve his Country and offers up his life?

A politician's stipend and the style in which he lives
Are sometimes disproportionate to the service that he gives.
While the ordinary soldier, who offered up his all,
Is paid off with a medal and perhaps, a pension small.

It's so easy to forget them for it was so long ago
That the old Bills of our Country went to battle, but we know
It was not the politicians, with their compromise and ploys,
Who won for us the freedom that our Country now enjoys.

Should you find yourself in danger, with your enemies at hand,
Would you want a politician with his ever-shifting stand?
Or would you prefer a soldier, who has sworn to defend
His home, his kin and Country and would fight until the end?

He was just a common soldier and his ranks are growing thin,
But his presence should remind us we may need his like again.
For when countries are in conflict, then we find the soldier's part
Is to clean up all the troubles that the politicians start.

If we cannot do him honour while he’s here to hear the praise,
Then at least let's give him homage at the ending of his days.
Perhaps just a simple headline in a paper that would say,
"Our Country is in mourning, for a soldier died today."

I watched the flag pass by one day,
It fluttered in the breeze.
A young Marine saluted it,
And then he stood at ease.

I looked at him in uniform
So young, so tall, so proud,
With hair cut square and eyes alert
He'd stand out in any crowd.

I thought how many men like him
Had fallen through the years.
How many died on foreign soil
How many mothers' tears?

How many pilots' planes shot down?
How many died at sea
How many foxholes were soldiers' graves?
No, freedom isn't free.

I heard the sound of Taps one night,
When everything was still,
I listened to the bugler play
And felt a sudden chill.
I wondered just how many times
That Taps had meant "Amen,"

When a flag had draped a coffin.
Of a brother or a friend.
I thought of all the children,
Of the mothers and the wives,
Of fathers, sons and husbands
With interrupted lives.

I thought about a graveyard
At the bottom of the sea
Of unmarked graves in Arlington .
No, freedom isn't free.

What is a Vet?

He is the cop on the beat who spent six months in Saudi Arabia sweating two gallons a day making sure the armoured personnel carriers didn't run out of fuel.

He is the bar-room loudmouth, dumber than five wooden planks, whose overgrown frat-boy behaviour is outweighed a hundred times in the cosmic scales by four hours of exquisite bravery near the 38th parallel.

She (or he) is the nurse who fought against futility and went to sleep sobbing every night for two solid years in Da Nang.

He is the POW who went away one person and came back another - or didn't come back AT ALL.

He is the Parris Island drill instructor who has never seen combat - but has saved countless lives by turning slouchy, no-account rednecks and gang members into Marines, and teaching them to watch each other's backs.

He is the parade riding Legionnaire who pins on his ribbons and medals with a prosthetic hand.

He is the career quartermaster who watches the ribbons and medals pass him by.

He is the three anonymous heroes in The Tomb Of The Unknowns, whose presence at the Arlington National Cemetery must forever preserve the memory of all anonymous heroes whose valour dies unrecognized with them on the battlefield or in the ocean's sunless deep.

He is the old guy bagging groceries at the supermarket - paralyzed now and excruciatingly slow - who helped liberate a Nazi death camp and who wishes all day long that his wife were still alive to hold him when the nightmares come.

He is an ordinary and yet an extraordinary human being - a person who offered some of his life's most vital years in the service of his country, and who sacrificed his ambitions so others would not have to sacrifice theirs.

So remember, each time you see someone who has served our country, just lean over and say Thank You. That's all most people need, and in most cases it will mean more than any medals they could have been awarded or were awarded. Two little words that mean a lot, "THANK YOU."